From being unsure of his place in the regional state team to score a double ton after Virender Sehwag as an opener in Test cricket, Mayank Agarwal proved his critics wrong. Let’s know about this rising star biography.

Mayank Agarwal was born in Banglore in a Brahman family on 16 February 1991. His father’s name is Anurag Agarwal, who is a Bangalore based Builder, and his mother’s name is Suchita Singh, who is a housewife.
The only sibling of Mayank is his elder brother Raj Kishan who is a former state-level cricketer.
He did his schooling at Bishop Cotton Boys’ School, Banglore, and he is graduated from Jain University, Banglore. Moreover, Jain University is one of the top universities in South India.

Mayank Agarwal is a right-handed batsman. At the age of 18, when he was in college, he started to play domestic cricket.
Mayank started his domestic career in 2010. In 2013, he played his first-class match against Jharkhand.
In 2014-15 Mayank was suffering from fitness issues, and he has to work on his physical fitness. But he came back strongly.
In the 2017-18 Ranji Trophy, while playing against Maharashtra for Karnataka Mayank scored a triple century.
Mayank scored 1,160 runs in his 2017-18 Ranji trophy and was leading run-scorer in that tournament.
In that same year, he scored 723 runs in Vijay Hazare trophy, and here also he became the top scorer in that tournament.
He made 2,141 runs in 2017-18 domestic tournaments, most runs by any domestic cricketer in the year 2017-18.
After a successive performance in Ranji and Vijay Hazare trophy, he was selected in the India B team for Deodar trophy 2017-18. 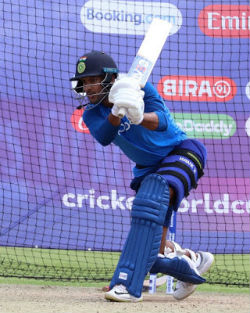 Mayank Agarwal was scheduled to make his international test debut in 2018 against the west indies, but due to an injury, he was not able to play and has to exclude from that test series.
Finally, he made his international debut at Melbourne Cricket Ground against Australia.
It was a four-match test series, and in the third match where India was going with series tied at 1-1 each Mayank Agarwal made his international debut.
He came out with and eminent knock scoring 76 runs at a strike rate of 47.2 on 161 balls with 8 fours and 1 six in the first inning.
This is the knock that made him the batsman scoring most runs in an inning on debut while playing for India, and he broke the record of Dattu Phadkar, who scored 51 runs on debut.
In the second inning, Mayank Agarwal scored 42 runs off 102 balls highest in that batting array, but India went on losing that match.
In ICC world cup 2019 Mayank Agarwal was not selected in the Indian squad of 15, but due to cordial destiny, Mayank Agarwal got his name in playing eleven as Vijay Shankar injured his toe while practicing in nets and in this prestigious event he made his awaited ODI debut. 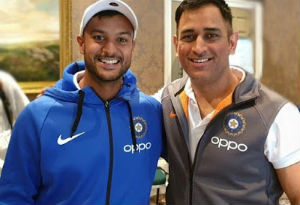 IPL always work as a pedestal for cricketers to glory, and to begin his path to glory, Mayank Agarwal made his IPL debut playing for RCB (Royal Challengers Bangalore) in the year 2011, but he was to able to play exceptionally well, his performance in that IPL was not up to the mark.
Later on, after 3 years with RCB, he joined Delhi Daredevil (now Delhi Capitals), and later on, he was bought by Pune Supergiant in 2017. After his record-breaking performance in domestic session in 2017-18, Kings Eleven Punjab bought him for a whopping 1 crore rupees. 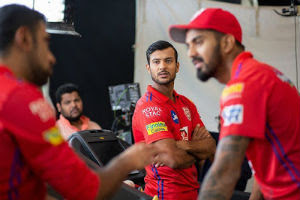 Mayank’s father’s name is Pranav Kumar he is a builder by profession, his mother’s name is Suchita Singh is a house maker.
He only has an elder brother, Raj Kishan, who is a former domestic level cricketer.
He married his childhood friend Ashita Sood, they engaged in January 2018 and in June they tied their wedding knot.
Ashita studied with him in the same school and graduated with from the same university, she has been his best friend from childhood.
Besides being his spouse, she is also his manager and makes important decisions related to Mayank Agarwal. She can be seen in stands supporting her husband.

Mayank is one of the most promising youngsters of the Indian cricket team, the way he works on his fitness and his gameplay he will surely frame his name among the top cricketers.
We will always support him !!!
Share
Facebook
Twitter
Pinterest
WhatsApp